How I put together a Caricature 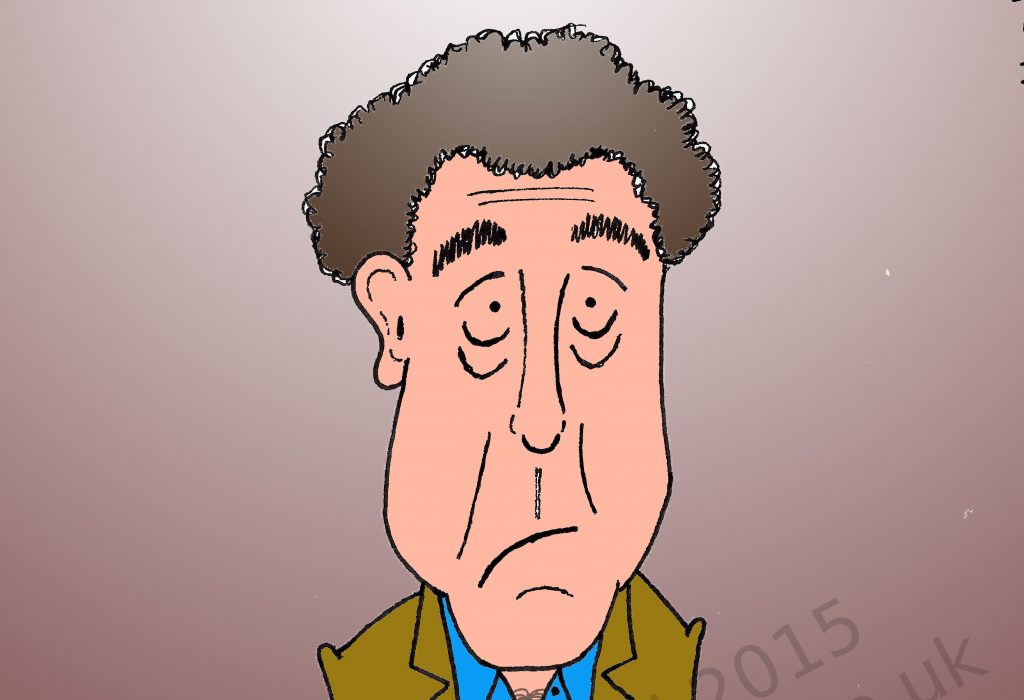 At the time I was last renovating my website, Jeremy Clarkson was in trouble for bopping his producer in a “fracas” about food. Specifically, the lack of hot food after a day’s filming somewhere in Yorkshire. Now, Clarkson has one of those faces that lend themselves very well to caricature, so I thought I’d give it a go.

Firstly, what is a Caricature? Oxford Dictionaries defines Caricature as “A picture, description, or imitation of a person in which certain striking characteristics are exaggerated in order to create a comic or grotesque effect.” Basically, a cartoon of someone with their most recognisable features exaggerated. Some cartoonists take the exaggerations to truly hideous proportions, but I prefer a more balanced approach that is still recognisable and funny.

I came up with a basic idea for a caricature: Clarkson looking a bit forlorn/grumpy, wearing some boxing gloves. Later, I decided to add a caption saying “I’ve never been in this much trouble over a food fight before”. The next stage was research. A quick Google yielded a recent photo of Clarkson pulling a bit of a “I’ve been a naughty boy” face, along with an earlier caricature of him by another cartoonist. This provided me with enough material to base my own caricature on.

The Process of Creating a Caricature

This gallery shows the different steps I followed to create my caricature: 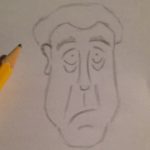 1) I got my pencil and paper and tried a quick sketch, trying to get the basic shape of his hair and face, with slightly exaggerated features. 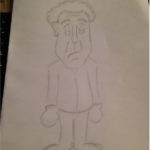 2) The next stage was a quick sketch of his body shape, including shrugged shoulders, the shape of the boxing gloves, and a bit of a middle-aged-man belly. 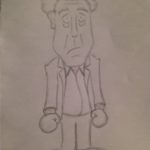 3) After this, I finished off the pencil sketch by adding some extra details, such as his shirt and jacket and the boxing gloves. 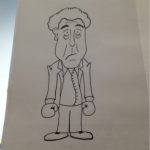 4) When I was happy with the pencil sketch, I got some very smooth, very white paper and a black drawing pen and proceeded to trace over the sketch. At this stage, I added all the final details such as buttons on the shirt, details on the shoes and the scruffy curliness of Clarkson’s hair. The paper has to be very smooth and white because any texture or imperfections on the paper will show up when scanned into the computer. 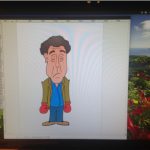 5) After scanning the traced image into my computer, I used a graphics tablet and photo editing software to add colour and textures to my black-and-white drawing. The graphics tablet allows me to paint on the image more accurately than if I were to use the mouse. I can quickly add colour to the drawing by picking the right colour and clicking on a blank area of the drawing. The computer then fills the selected area evenly with the colour. If there is a gap in the black line between two areas, the digital paint flows through, so to stop this happening I have to use the graphics tablet to close any gaps and correct any mistakes I made while tracing. Also, if the paper has a smudge or texture on it, then this does strange things when I try to paint on it, hence why the paper has to be very smooth and very white. 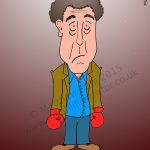 I follow the same procedure with every cartoon or caricature I draw: Research, Sketch, Trace, and Colouring. Out of those four stages, probably sketching takes the longest, while research and tracing are the quickest stages. In all, it probably took me about 6-8 hours from start to finish. That was relatively speedy for me, as I found this cartoon quite easy and fun to do. A more complicated cartoon with extensive background detail would probably take me a lot longer, partly because when it comes to drawing, I’m rather demanding of myself and will keep redoing details until they are near perfect!

So that’s the story of the Clarkson caricature. Now I just hope he doesn’t see it and come round and bop me one!…