decorating a stag for a school project 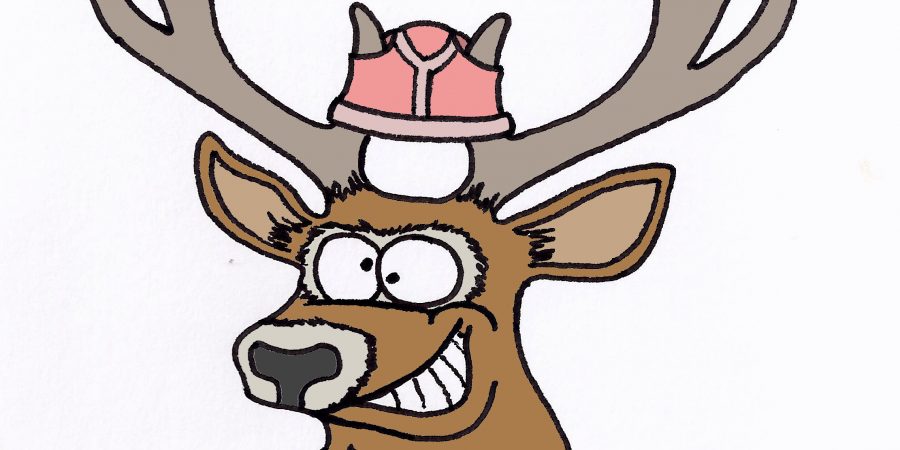 Every now and again I get a request for something a bit different. Last winter one of those requests landed in my inbox, and I thought I’d give it a try.

A local Primary School was planning a treasure hunt all over my home town as a fundraiser, which they would hold over a couple of weeks during the summer. The plan was to get the kids to decorate a wooden deer head for each class to hide around the town. People could then pay £2 for a map to follow and collect clues, with one lucky family winning a prize.

The school also wanted to get some local artists involved to decorate their own wooden deer heads, and I was one of the names that came up.

While I was happy to get on board to support a local cause (and of course, plug some of my artwork in public), this one threw up a particular challenge. I usually only deal with digital mediums, as quite frankly, physical paint is not my thing. So I decided on a slightly long-winded hybrid method that actually turned out OK.

Before getting too far ahead, I decided to brainstorm a few ideas and present some different options to the PTA member who had contacted me. I had basically been given free reign to do what I wanted, but I thought I might as well see what they liked best out of my ideas. This is the MDF template that I was provided with to decorate, and the four draft options I came up with: 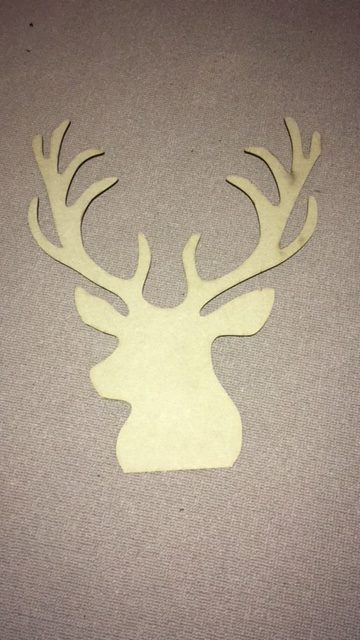 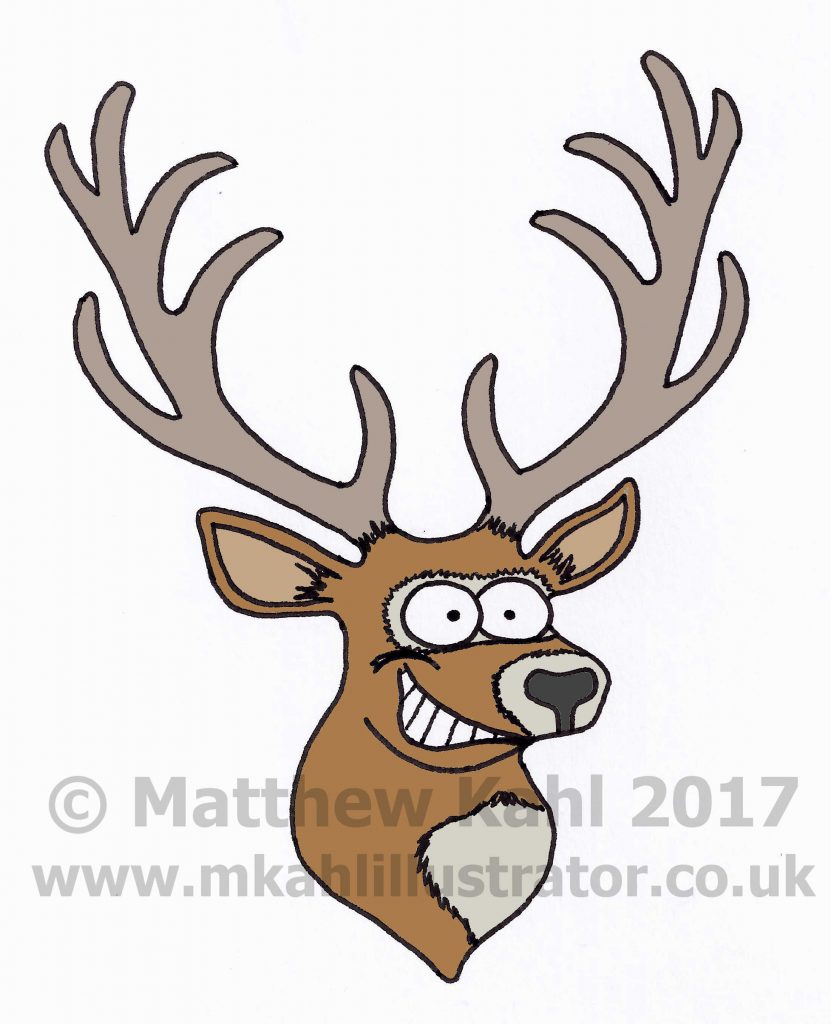 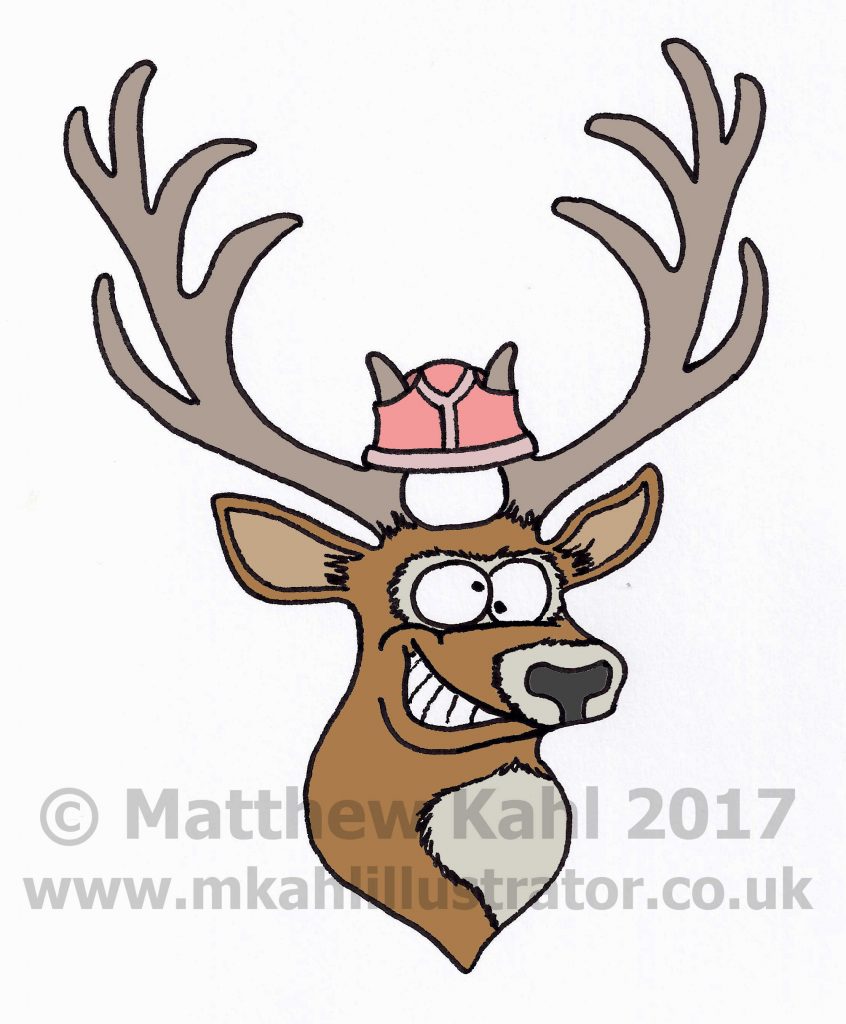 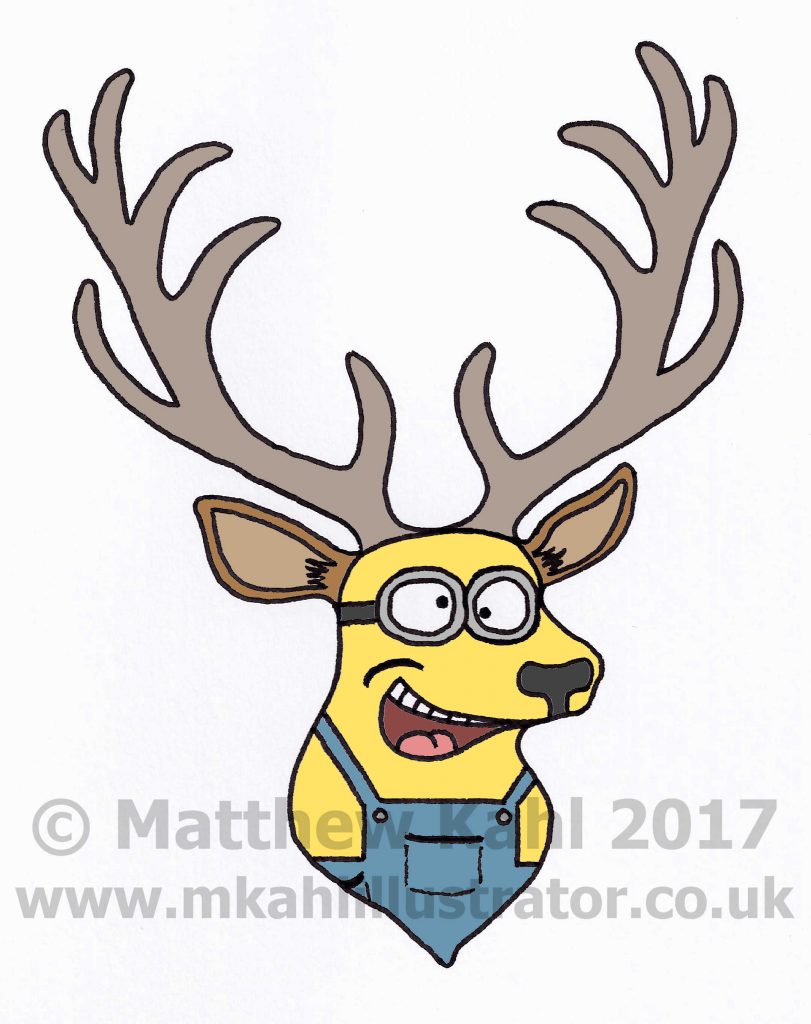 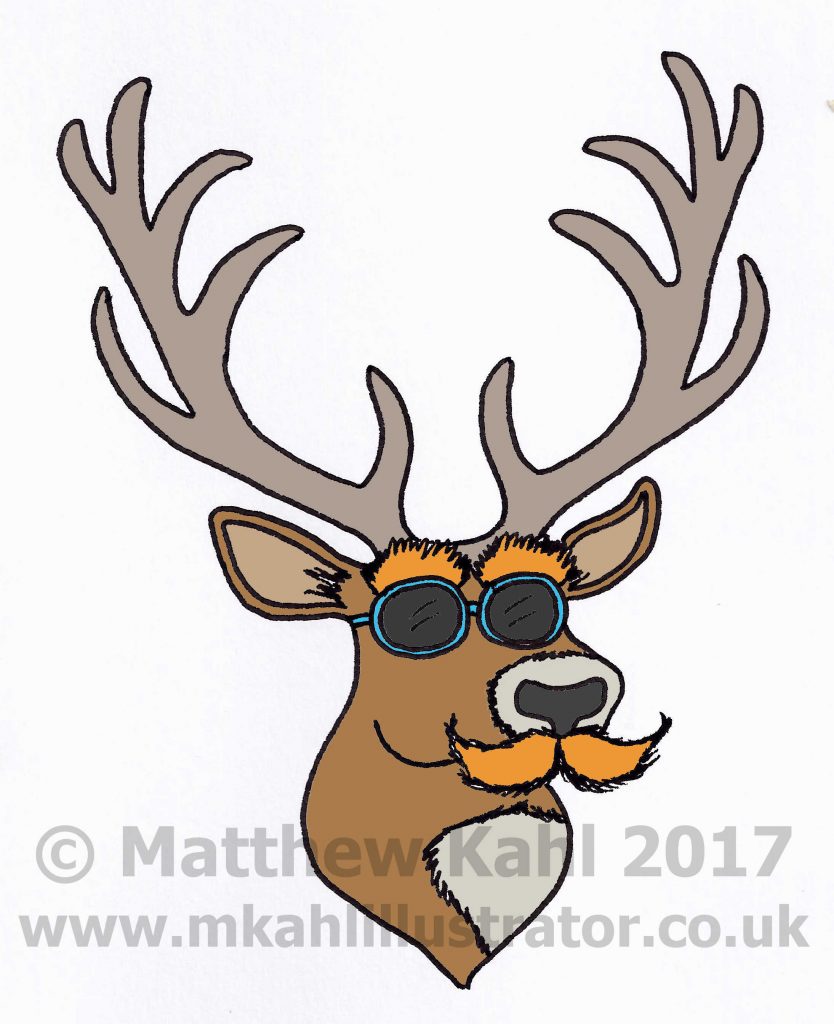 Apparently the PTA member asked her children which deer they preferred. Being 6 and 11, you can guess which one they liked the best – the one with the pink pants! To be honest, that was my favourite too. As soon as I saw the antlers I knew I had to do something with them!

Turning Wood into Pixels, then back again

Now with a design confirmed, I had to figure out how to get my digital cartoon onto a physical template. The gallery below shows how this was finally achieved: 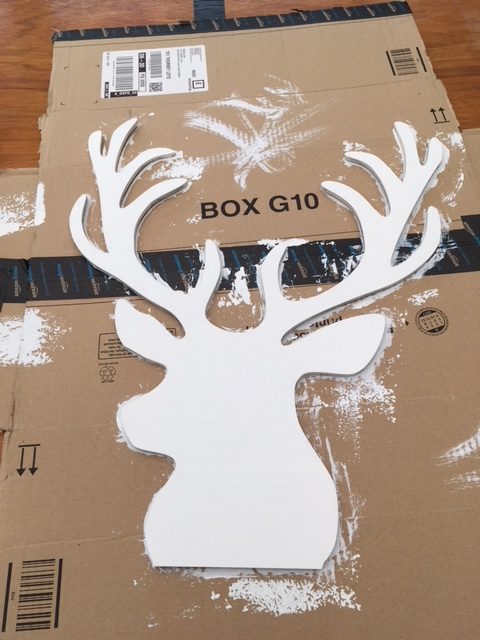 The template was painted white so that my image would be lit properly from behind, and so it would have a clean surface to be stuck onto.

Next I traced carefully around the template onto three A3 sheets of paper. These were scanned and composited into one image that I could then print out smaller and use to create my design at the proper proportions. 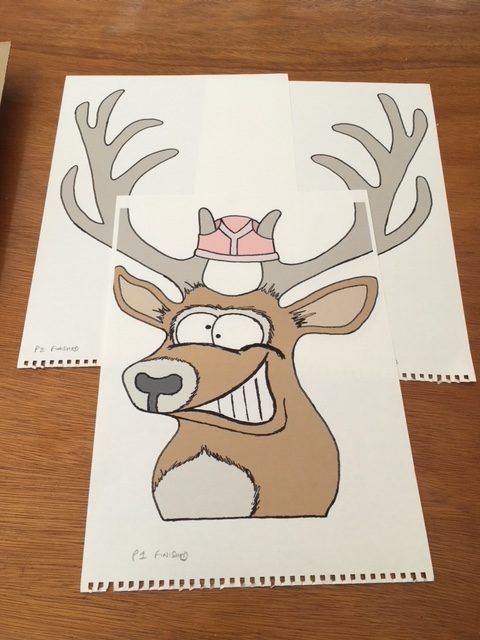 After scanning my design back in and scaling it back up to size, it was again printed out onto three A3 sheets. However, it was at this stage that I realised the antlers would have to be ditched, as the printer had left a gap between the sheets. 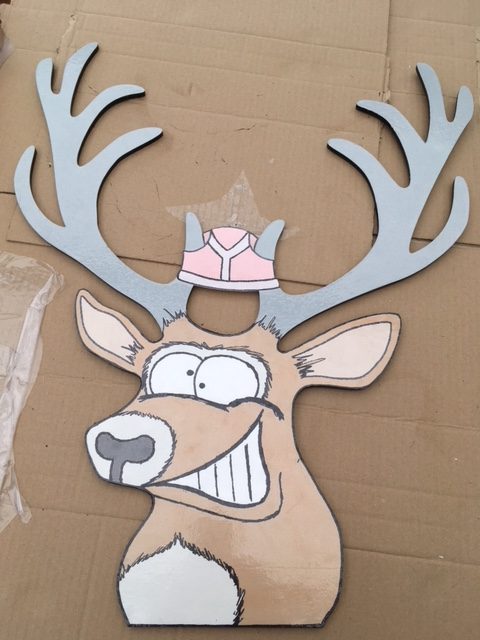 After painting the antlers, I cut carefully around the head of my deer design. It was then covered both sides with clear adhesive film and glued onto the template. The pants were also cut out, laminated and glued in place. 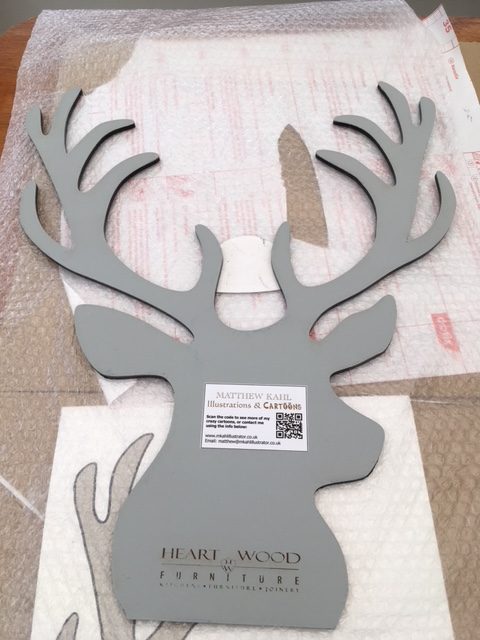 The back of the template already had the wood carvers logo engraved into it, so I thought I ought to add my own label 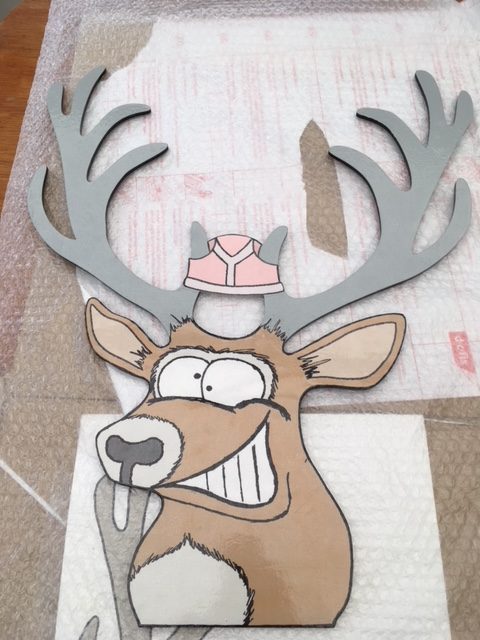 Finally, the whole template was wrapped in clear adhesive film, so as to hold everything in place and give a uniform glossy finish.

After I was finished, the deer head was collected by the PTA, who were very pleased with the finished product. A few weeks later, my design was placed in the window of a local pottery shop: 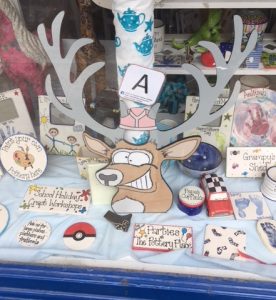 I was quite pleased to see my work showcased in the town along with all the other deer heads – many decorated by the various classes and some by local artists. I have to say many of the other designs were absolutely amazing – intricate hand-painted floral patterns, woodland scenes and landscapes.

While I can’t say my daft stag with underpants on his antlers was going to win any awards, I like to think it made everyone who passed that pottery window laugh.